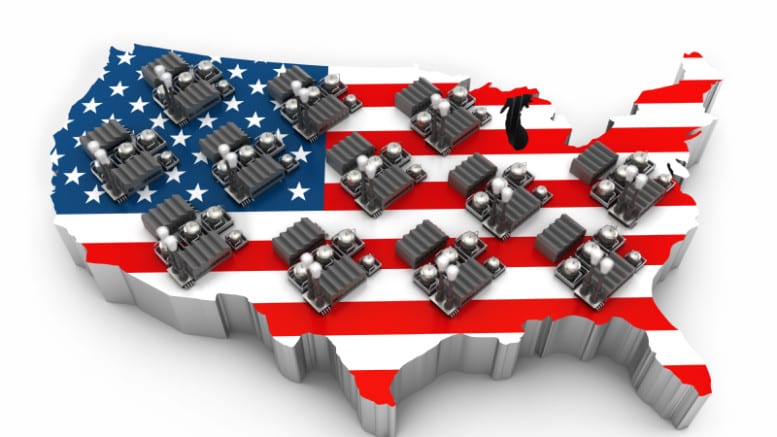 – For every $1.00 spent in manufacturing, another $1.40 is added to the economy. That is the highest multiplier effect of any economic sector.

– Manufacturers have one of the highest percentages of workers who are eligible for health benefits provided by their employer. Indeed, 92 percent of manufacturing employees were eligible for health insurance benefits in 2015, according to the Kaiser Family Foundation. This is significantly higher than the 79 percent average for all firms. Of those who are eligible, 84 percent participate in their employer’s plans (i.e., the take-up rate). There are only two other sectors—government (91 percent) and trade, communications and utilities (85 percent)—that have higher take-up rates.

– Manufacturers have experienced tremendous growth over the past few decades, making them more “lean” and helping them become more competitive globally. Output per hour for all workers in the manufacturing sector has increased by more than 2.5 times since 1987. In contrast, productivity is roughly 1.7 times greater for all nonfarm businesses. Note that durable goods manufacturers have seen even greater growth, almost tripling their labor productivity over that time frame.

To help illustrate the impact to the bottom line of this growth, unit labor costs in the manufacturing sector have fallen 12.3 percent since the end of the Great Recession, with even larger declines for durable goods firms.

– Over the next decade, nearly 3.5 million manufacturing jobs will likely be needed, and 2 million are expected to go unfilled due to the skills gap. Moreover, according to a recent report, 80 percent of manufacturers report a moderate or serious shortage of qualified applicants for skilled and highly skilled production positions.

– Exports support higher-paying jobs for an increasingly educated and diverse workforce. Jobs supported by exports pay, on average, 18 percent more than other jobs. Employees in the most trade-intensive industries earn an average compensation of nearly $94,000, or more than 56 percent more than those in manufacturing companies that were less engaged in trade.

– Over the past 25 years, U.S.-manufactured goods exports more than quadrupled. In 1990, for example, manufacturers in the United States exported $329.5 billion in goods. By 2000, that number had more than doubled to $708.0 billion. In 2014, it reached an all-time high, for the fifth consecutive year, of $1.403 trillion, despite slowing global growth. However, a number of economic headwinds have dampened export demand so far in 2015, with manufactured goods exports down 4.2 percent year-to-date through the first two quarters of the year.

– Manufactured goods exports have grown substantially to our largest trading partners since 1990, including to Canada, Mexico and even China. Moreover, free trade agreements (FTAs) are an important tool for opening new markets, with 52 percent of manufactured goods exports flowing to our FTA partners in 2014. The United States enjoys a $55.0 billion manufacturing trade surplus with its trade agreement partners, compared with a $579.2 billion deficit with other countries.

– Foreign direct investment in manufacturing exceeded $1 trillion for the first time ever in 2014. Across the past decade, foreign direct investment has more than doubled, up from $499.9 billion in 2005 to $1,045.5 billion in 2014. Moreover, that figure is likely to continue growing, especially considering the number of announced ventures that have yet to come online.

– U.S. affiliates of foreign multinational enterprises employ more than 2 million manufacturing workers in the United States, or almost one-sixth of total employment in the sector. In 2012, the most recent year with data, manufacturing sectors with the largest employment from foreign multinationals included motor vehicles and parts (322,600), chemicals (319,700), machinery (222,200), food (216,200), primary and fabricated metal products (176,800), computer and electronic products (154,300) and plastics and rubber products (151,200). Given the increases in foreign direct investment since 2012, these figures are likely to be higher now.

– Manufacturers in the United States perform more than three-quarters of all private-sector research and development (R&D) in the nation, driving more innovation than any other sector. R&D in the manufacturing sector has risen from $126.2 billion in 2000 to $229.9 billion in 2014. In the most recent data, pharmaceuticals accounted for nearly one-third of all manufacturing R&D, spending $74.9 billion in 2014. Aerospace, chemicals, computers, electronics and motor vehicles and parts were also significant contributors to R&D spending in that year.

– Manufacturers consume more than 30 percent of the nation’s energy consumption. Industrial users consumed 31.5 quadrillion British thermal units of energy in 2014, or 32 percent of the total.

Why Is Manufacturing More Expensive in India Than in China?