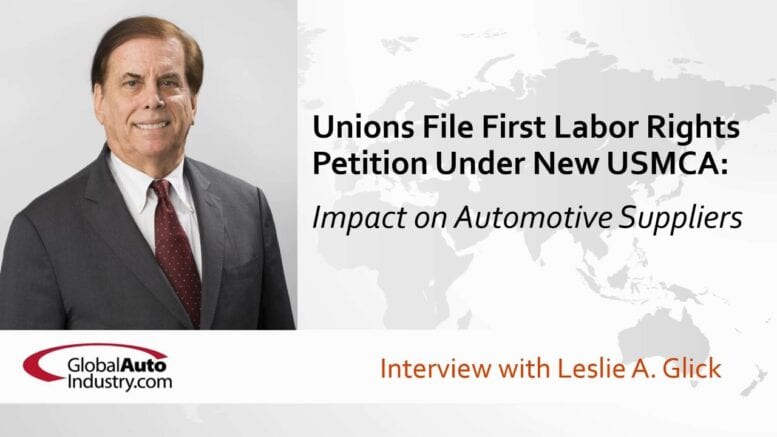 GlobalAutoIndustry.com’s latest Audio Interview “Unions File First Labor Rights Petition Under New USMCA: The Impact on Automotive Suppliers” features Leslie Alan Glick. Mr. Glick is co-chair of the Butzel Long International Trade and Customs Specialty team. He is a specialist in international trade and customs for over 30 years, and is the author of 5 books on international trade and customs topics, including NAFTA and USMCA. He has given a series of seminars on USMCA-NAFTA 2.0. He is active in importer response to new tariffs under sections 232 and 301 (have filed over 50 exclusion requests for clients) as well as complex country of origin rulings. He works with US importers and exporters from Mexico, Brazil, Italy, Austria, France, Germany, China, Turkey, Japan and Vietnam.

In the 17-minute Audio Interview, Mr. Glick discusses these questions:

• You have written a recent book on the new U.S. Mexico Canada Agreement (USMCA). I understand there was an important development this week. Can you tell us about it?
• Can you explain in more detail, some of the labor reforms that took place in Mexico in advance of USMCA, and perhaps as a pre-condition to USMCA?
• What exactly was the new complaint about?
• What exactly are the provisions in the new USMCA that dealt with labor practices?
• What is your advice / takeaway to US (and other foreign) suppliers and producers with plants in Mexico as a result of these recent actions?