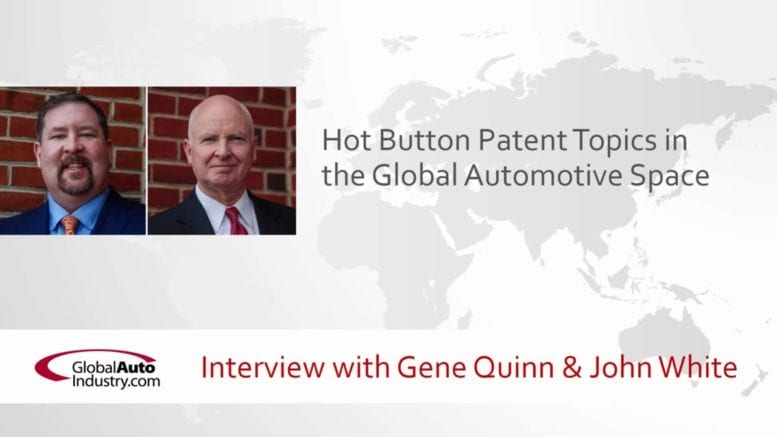 GlobalAutoIndustry.com’s latest Audio Interview, “Hot Button Patent Topics in the Global Automotive Space” features Gene Quinn and John White. Gene is a patent attorney and a leading commentator on patent law and innovation policy. He is the Founder, President of IPWatchdog.com, a leading IP and patent law blog. John is a US patent attorney and patent lecturer, and is Adjunct Law Professor at the University of Virginia School of Law. Both work with automotive clients on various global patent issues.

In the 14-minute Audio Interview, Mr. Quinn and Mr. White discuss these questions:
• What is the most important topic in the patent space as far as automotive technology is concerned?
• Have that supplanted electric cars or is electrification still a big issue?
• Who is driving this? Who are the players?
• What about the speed of technical change?

About Gene Quinn and John White:
Gene Quinn is a patent attorney and a leading commentator on patent law and innovation policy. Mr. Quinn is the Founder of IPWatchdog.com, which he started in 1999, and currently serves as President & CEO. IPWatchdog.com has been recognized multiple times by the American Bar Association as a top 100 legal blog, multiple times as the top IP blog, and in 2014 was inducted into the ABA Blawg Hall of Fame.

Regarded as an expert on software patentability and U.S. patent procedure, Mr. Quinn’s particular specialty is in the area of strategic patent consultancy, portfolio building and patent prosecution strategies. He also regularly advises attorneys and clients on litigation strategy and appeals.

Mr. Quinn is also Of Counsel to the law firm of Berenato & White LLC. He advises inventors, entrepreneurs and start-up businesses throughout the U.S. and around the world. He also consults with attorneys facing peculiar procedural issues at the Patent Office, advises investors and executives on patent law changes and pending litigation matters, and represents patent practitioners before the Office of Enrollment & Discipline.

Mr. Quinn began his career as a litigator handling a variety of civil litigation matters, and he has been a patent attorney for nearly two decades. He has previously taught a variety of intellectual property courses at the law school level, teaching courses such as patent law, patent claim drafting, patent prosecution, copyright law, trademark law and introduction to intellectual property at Syracuse University College of Law, Temple University School of Law, The University of Toledo College of Law, the University of New Hampshire School of Law, the John Marshall Law School (Chicago) and Whittier Law School. Since 2000 Mr. Quinn has also taught the leading patent bar review course in the nation.

John White is a US patent attorney and a patent lecturer. He is an Adjunct Law Professor at the University of Virginia School of Law, and he is also the principal lecturer/author of the PLI Patent Bar Review Course, a course that he originally created.

Since John began teaching patent bar review courses in 1995, he has personally taught close to 50% of all practicing patent attorneys and patent agents how to successfully become admitted to the Patent Bar. John has also taught numerous US Patent Examiners at the United States Patent & Trademark Office (USPTO) in the “Law and Evidence Course” necessary for them to advance to Partial Negotiation authority as Examiners. John serves as an expert witness in patent litigations and is regarded as a leading authority on patent practice and procedure. He maintains a select patent practice largely aimed at assisting start-up technology companies increase and monetize their patent portfolios.